“Compound interest is the eighth wonder of the world. He who understands it, earns it … he who doesn’t … pays it.” ― Albert Einstein

This quote is special because Einstein revolutionized our understanding of time, and interest is intimately related to the value of time. The interest rate is frequently used to discount money in the future. Another cool way to think about interest is that it’s the price of sending money back in time.

Now let’s get into the math.

What about the really, really long term? How does the interest grow? Looking back at the formula:

You can see that if the interest rate r is fixed over time, that it grows exponentially in t. This is what makes it ‘the wonder of the world’. Saving $X dollars a year grows linearly, but interest compounds exponentially. 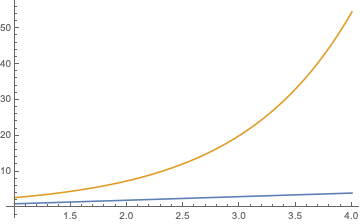 The Federal Reserve is the central bank of the United States. It has a dual mandate to keep inflation low and also keep unemployment low. It’s main tool for doing this are “Open Market Operations”, which amount to buying bonds with newly printed money, or removing bonds from circulation. These buying and selling operations can guide the federal funds rate to the Federal Reserve’s goal. The federal funds rate is a minimum interest rate. If it’s low, then borrowing is cheap and unemployment will fall, since it’s cheaper for businesses to borrow and hire people. However, if it remains too low for too long, it’s possible that all that cheap borrowed money could push up inflation.

The Federal Reserve has to set the interest rate low enough to encourage job creation, but not too low that it stokes more inflation than the target.

The long-term decline of interest rates

The Bank of England published an interesting document called Eight centuries of global real interest rates, R-G, and the ‘suprasecular’ decline, 1311–2018. In it they find a -1.96bps (basis point, or 0.01%) per year trend. That means that for the last 800 years, real interest rates have been declining by -0.02% per year.

After the crash of 2008, central banks around the world lowered their interest rates to 0 in order to prevent the financial crash from turning into a repeat of the Great Depression. This worked in the United States, but in the European Union, the ECB (European Central Bank) had to experiment with lowering their interest rates to below 0.

So, \(r\) can be any real number, negative, positive or zero. What about complex numbers?

(For a primer on imaginary and complex numbers, see my post Imaginary Numbers are Real)

But wait a minute, what does an imaginary amount of money mean? One way to imagine it is that the currency unit is actually a pair of units, like say, USD and DOGE. And there’s this rule that if you multiply 1 DOGE * 1 DOGE it becomes worth -1 USD. This is equivalent to the complex number arithmetic.

So all wallets in the economy would have US Dollars and Dogecoin, and the Federal Reserve would set the complex federal funds rate so that the compound interest grows in a spiral that doesn’t diverge too quickly.

One way to see it is to convert the complex number to polar coordinates, then raising it to a power will cause it to grow in a spiral or shrink in a spiral. Here’s an example I cooked up with Mathematica:

In Pierru 2010, the paper talks about the real and imaginary components representing two assets, A and B, with their own distinct rates of interest, ρA and ρB, and the imaginary unit i is interpreted as an exchange operator, exchanging some of A for B, or vice versa.

Then the paper defines a complex rate of return in terms of ρA and ρB, where the period over which the interest is accrued is followed by an exchange between asset A and B.